Today I have a real hotel room again. Not on the beach, but still with a view, spacious and clean, the small fridge is filled with water bottles and for tomorrow morning I have breakfast in view. A good feeling after a stage of 71 kilometers through uneven terrain along the coast.
I rinse off my sweaty sports clothes, shower and then run a few errands, looking for something edible for tonight. I saw two advertising posters of a pizza baker earlier – that would be a change.

Chumphon is another provincial capital in the south of Thailand, has banks, a train station, a lot of traffic in the streets and a lot of bigger shops, as I saw when I was looking for the Nanaburi Hotel earlier. There is a shopping mall nearby and I urgently need some postcards and a new tube or can of skin cream.
Ever since I was recommended and sold a can of aloe vera cream by a pharmacist in Port Dickson because my skin had blistered on my calves that Sunday, I’ve been using it every day after showering, to give the skin a little relaxation after each sun-intensive day. Accordingly, the can is now almost empty.
I quickly find what I am looking for with the creme, and I ask around for postcards without much success – I may be lucky tomorrow at the tourist information office.

Since Surat Thani I have been traveling north along the coast, Bangkok is still about 10 days away. The street I use does not always run directly on the beach, but mostly at a short distance from it, sometimes it also hooks, bypasses a hill or connects settlements that are not lined up like a string of pearls. Here too, away from the heavily used north-south connection 4112 (later 4134) and the parallel railway line, are small villages, run smaller and wider rivers, at the mouth of which there is sometimes a small fishing port, loamy water to the sea, which here ‘ Gulf of Thailand ‘ means. At Pak Nam Suan there are some larger trawlers on the quay wall below the bridge that spans the river there.

Sometimes the road is straight, e.g. for about three kilometers, the narrow beach in sight, in the distance small, darkly forested islands in the slightly crumbled water. Palm trees provide ample shade on the green strip between the sea and the road, sometimes individual cattle graze between the palm trees, accompanied by small, usually white, herons.
Then the road winds through the green landscape past countless pools of water, breeding pools for King Prawns , about 1 to 1.5 meters deep, where motor-driven paddles constantly hit the surface to oxygenate the water so that the crabs thrive better. In order to keep water birds away, these breeding basins are spanned in a star shape with wires or strings in mostly red color. Crab production in a really big style.

The supply situation has worsened somewhat for me in this region, because where is no through traffic, there are generally fewer people, the range of freshly prepared food is also significantly lower. I don’t find anything between Chaiya and Lamae even in the early afternoon because there is simply no settlement along the street. Palm trees, crab breeding facilities, isolated plots of land, yes, but no outpatient cook who would have built up somewhere with her utensils, no mini-restaurant, at most once a shop where I could have bought cookies, nothing else.

In this actually somewhat remote area there are also a relatively large number of Buddhist monasteries and temple complexes. And in quite different condition, some of them look very new, some are being built.

When I leave Surat Thani on Sunday, I stop, for example, immediately after a few kilometers on a small cross-road at a wat, the chedi of which I had see glow over the palm tree tops the evening before. A morning market is just being abrogated there when I arrive. There’s hectic activity around the facility while I try to take a few photos of the white dome. So far I had only seen a few such chedis of similar construction, and they had always been colored gold. This one is now white. No one is to be seen from the monks, but villagers and some wild dogs, one of whom seems to be threatened or disturbed by my presence, at least he yaps all the time when I am there. The older gentlemen in the shadow of the neighboring small houses are not initially disturbed in their conversation, but then they try to scare the animal away.

Ah, the dogs; from now on I have an eye and two ears on them. In the morning I drive a short distance on highway 420 and soon turn off again to drive in an arc through an area where pretty villas with palm plantations come off. There have been a lot of stray dogs so far, either they didn’t let me bother them on the bike or they scared away because they didn’t know what to do with the almost silently moving something. For the first time, however, I meet dogs that apparently also have a guard function and are not strays. In any case, I am barked from one or two properties and also attacked by a beast. And this behavior towards me will continue to increase over the next few days. Sometimes it is simply difficult to just stop somewhere and ‘come down’ briefly in the shade, because sometimes it is that as soon as I stop, it starts yapping somewhere nearby. On Monday I really want to just put the bike against the next palm tree.
Since the yapping goof-off sometimes leaves behind me at the property boundaries, then run next to me and do a murder spectacle, without snapping or biting seriously, I take it more calmly now. Usually they fix my panniers and not even my legs.
This morning a whole group came running after me from a lot of land … 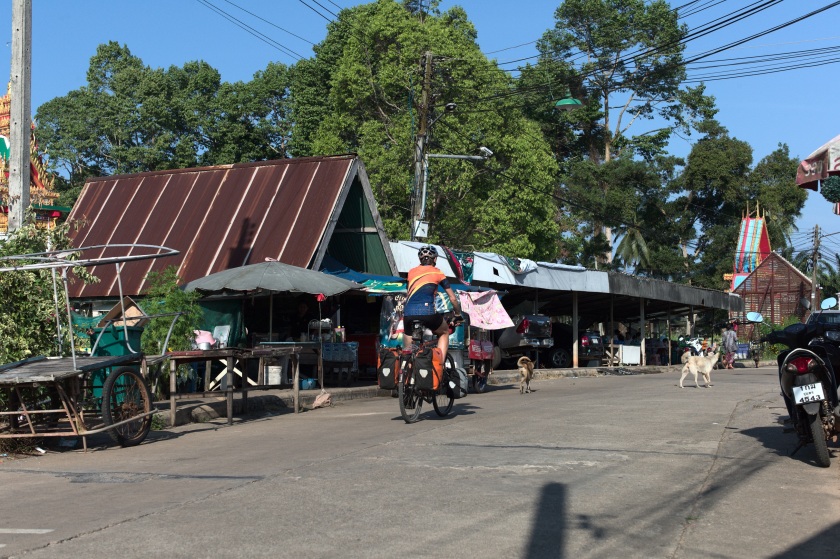 But there are also wonderful experiences. To get a nice meal for example, on a street corner right next to a school, where several generations take care of the guest, who has appeared out of nowhere with a helmet and sunglasses and is now asking for pasta. Grandma makes sure that my little bowl of broth, which is sometimes served with the actual meal, does not become empty, while the little one plays with some figures in the shadow of the simple tin roof.

At a larger temple complex on the edge of Chaiya , where the remains of one of the oldest temples in Thailand are located, a friendly, mischievous, older monk tries on my bike and whose extensions are interested in explaining something to me about the buildings of the facility. But I can’t quite make out of his hard-to-understand English. He soon goes on with his laptop bag in hand and I leave the spacious temple area again and roll back to Chaiya . On the way towards the beach, where I want to spend the night in a (for me) first beach resort on Sunday, I suddenly see a black BMW R25 standing on the veranda of a café. The old single-cylinder motorcycle is really spruced up. Unfortunately, I do not find out in the café whether it should catch people by bike as an eye-catcher or whether it is still ready to drive. Before I do the last 10 -12 kilometers on Sunday, I want to eat something, and the coffee just tastes good there.

Beach here does not necessarily mean beautiful paradise, even if countless coconut palms suggest such a picture. The beach is hopelessly littered in places. The sea sweeps back everything on land that has gotten into waterways, marine life, garbage ships or whatever for many years. Only a few resorts that want to offer their guests something apparently remove the garbage on their own shoreline.

The accommodations are still simple, sometimes at a little upper level, but at slowly increasing prices. The overall price level is lower than in Malaysia. So far I have not spent more than about 23 euros here, and that was more or less in the big city (Krabi) for a very well furnished room in a fairly new, small hotel. Yesterday on the beach it was also about 22 euros for a not very fresh hut with terrace and rather shabby bathroom, otherwise it was rather 13 to 15 euros for a simple but clean room. I was also the only guest there at Pak Nam Tako . In the two previous quarters at Lamae on the beach and in the area east of Chaiya , there were maybe one to three other local guests. The more busy operation probably takes place here in a different season.

Now here in Chumphon the hotel I chose, located in a side street, is regularly booked. There are a few other hotels and also European tourists in the city. I hear German-language sentences in a small group of somewhat tanned beards and while I am walking through the city another globetrotter arrives with his bike at one of the hotels on the main street.