The next major goal is the city of Siem Reap, where I have planned a break for a few days. The country initially offers little variety and little shade along the busy national road 5. During the day it is hotter in Cambodia than in Thailand, although the thermometer does not show more than there. At least that’s how I feel. The air humidity is obviously lower, but it cools down even more at night. The NR 5 leads straight ahead to the east. At a traffic circle about 7 km outside of Poipet, we can buy juice again in the shop of a modern gas station. This can be used to spice up the otherwise very tasteless water on the go.

Later there will only be simple stalls along the street, which also offer everything, but water is usually only in small bottles and fruit juice is not to be seen there. There is no comfortable hard shoulder on the side of the road, as on so many roads in Thailand, or at least the marking has long since disappeared. So always keep to the right and watch out for obstacles, because someone likes to stop at the edge. Otherwise, the horn is obviously an important means of communication in this country.

Apart from the heat, which I have to deal with, light wind presses against the driving comfort from the front. So we alternate with giving slipstream from time to time, which definitely does help something. For a few kilometers, I even hang behind one of the small cargo trailers with a single-axle tractor that has loaded sugar cane and is traveling at almost 18 km / h, Maik behind me. On top of the stack of sugar cane, a woman in work clothes with a sun hat is stretching out, dozing there.
For a short while, this is a bit slower progress, but a rather relaxed driving. The faster vehicles coming from behind also automatically pass us at a sufficient distance. Unfortunately the driver stops at an intersection in the next village and we have to deal with the slight headwind again.

I don’t see restaurants on the street that often anymore, and when I see a canopy with tables and chairs underneath the street in Nimitt, about halfway to Sisophon, we stop there and after a short question the boss also makes us a nice portion of fried rice with some vegetables and shrimp.

Shortly before the center of Sisophon, a brand new archway built in sandstone points to a Buddhist temple located behind it. I have never seen such an archway made of sandstone in Thailand or here in Cambodia, mostly it is simply bricked, modeled and decorated with cement, and then colored with a lot of bright color. This one seems to be an exception. The other temple buildings do not have sandstone decorations themselves. From the area of the temple, individual people come on their mopeds through the archway. A friendly gentleman explains to us that it would be no problem to visit the plant. However, it is not particularly spectacular, except that all the buildings still look new.

The next day we stop in the Rohal area at another temple, which is about 500m off the highway and on the edge of a village. This too was only renovated a few years ago and a blackboard explains in which years how much donations and from which countries were used. The area of the temple looks tidy, in a larger pond you can see some lotus plants in bloom and in some corners there are even trash cans. Should this be used to counter the waste problem that is otherwise visible everywhere?

Already in Poipet there was a lot of rubbish along the streets, and the further away from the main street the worse. Along the trunk road, which is built on a high embankment, the rubbish lies along the embankment or below it in the ditch. There it is apparently burned together with the dry grass from time to time. Traces of it can be seen clearly. Burning dry grass or crop residues in fields is a daily practice in this country. And there is always fly ash in the air, which presumably comes from fires that are placed in fields far away from the road in a controlled manner for the removal of crop residues. In the distance at least one or the other column of smoke can be seen and small flakes of ash collect again and again in the sweat on my arms. 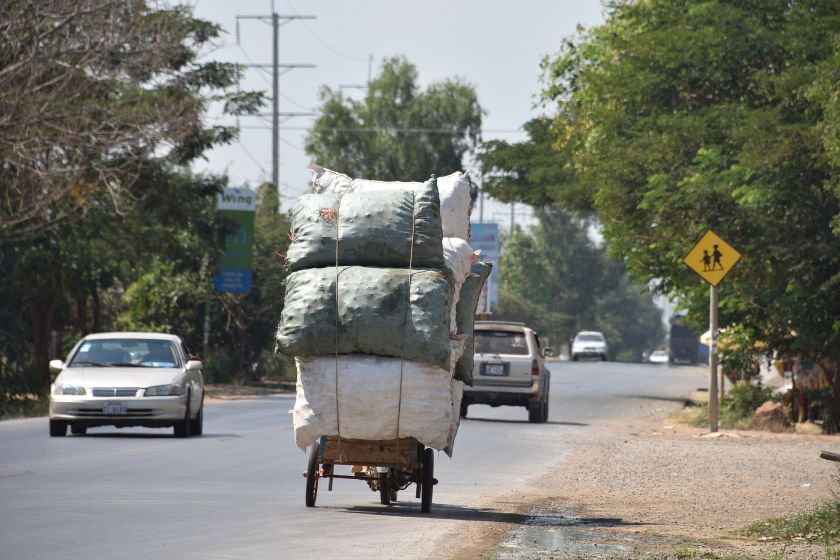 This continues in the settlements along the street, where sometimes open containers made from old car tires also serve as collection points. Often, however, the garbage lies around it. There does not seem to be an awareness of the dirt or avoiding it. It’s pretty sad to see.

Kralanh is a much smaller city, more of a small town with a large intersection and a market that stretches across several narrow streets near this intersection. There is also a large school there.
In the evening it is not so easy to find something edible. Some small street restaurants close in the late afternoon, when the market also comes to rest.

After some looking around and asking for food, we get stuck at the table of an inconspicuous food stall, which already offers pre-cooked stew with rice, plus canned beer from the slowly thawing refrigerator. The next ice delivery will not be replenished until tomorrow morning.

In the early morning I wake up to the song of a muezzin calling for prayer long before sunrise. With the sunrise he calls again later. I hadn’t noticed that in the evening, but it was probably because of the street noise in front of the restaurant where we had been sitting for a while.
Even before sunset, the air was slightly hazy from the smoke that is suddenly everywhere. Somewhere someone is lighting the swept up garbage in front of their house, or heating up the open small coal stove to cook dinner – and of course everywhere in the small streets.

From Kralanh it is less than 60 km to the center of Siem Reap. The landscape had changed slightly yesterday, with more dark green in the distance, thicker rows of trees between larger agricultural areas. Also fresh green from rice fields, seen in this way a quite lively landscape, despite the scorching heat. 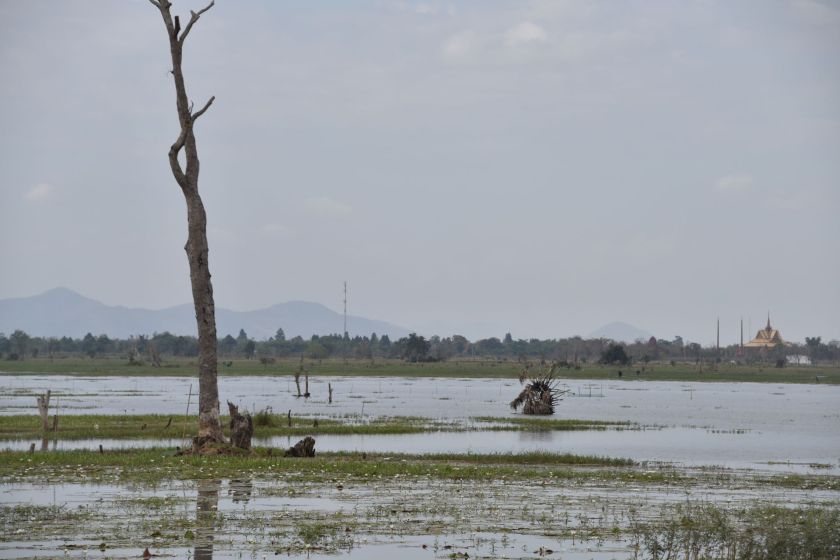