I quickly drove out of Sa Kaeo and lined up on the left side of Route 33, which is also signposted as Asia Highway 1. There is now a bit more heavy traffic on the road again, mostly unloaded trucks that dance across the asphalt at far too high speeds. Later, these or similar teams meet me on the other side of the street, overloaded with sugar cane. The sugar refinery lies

With a light tail wind, driving is still quite fast on this wide road. More or less undisturbed on the wide hard shoulder, except for occasionally parked vehicles. In Watthana Nakhon I take a longer break after about 33 km at a petrol station with a rest area, with an air-conditioned café and with a further, simply covered restaurant hall.
When I get off my bike in front of the restaurant, a middle-aged Thai man speaks to me. He would have seen me on the road on the way and would find it fascinating that I would ride the bike and all my luggage and at such a relatively high speed in this part of the world, and he wishes me good luck.
The offer from the existing pots is unfortunately very meat-heavy, so I eat a portion of rice with the rest of the existing vegetables, two eggs and a little chicken.
Until Aranyaprathet I drive a little more than an hour in the midday heat, hand in a card at the local post office and slowly roll on to the border. 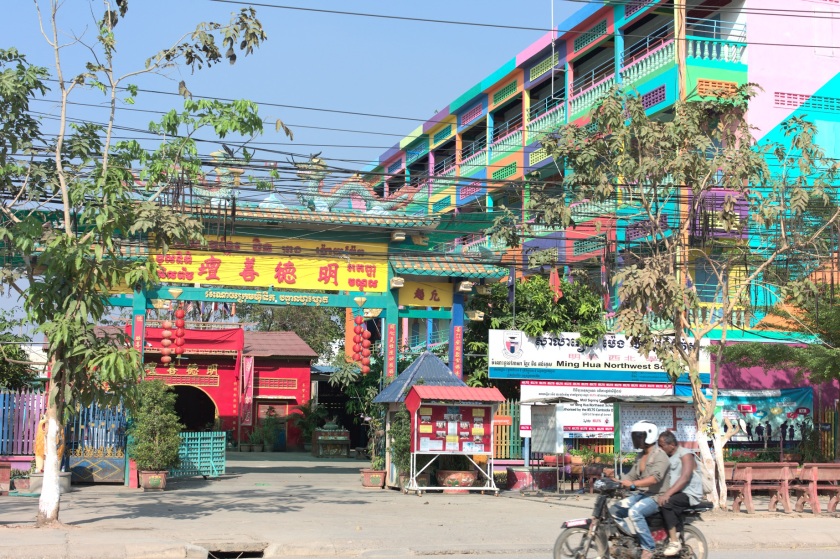 The entry to Cambodia is then much less problematic than I expected. You don’t have to believe all the stories of travel guides just because of the fact that they are printed in a book. If you obviously make a mistake somewhere, someone will come who shows you where the relevant counter windows can be found or where you should park your bike.
It’s actually quite simple: get a farewell stamp from Thailand at the local border police, a farewell photo will be taken right away, then roll about 300 meters through the no man’s land and change the road side to the Cambodian side of the border, because oncoming traffic does the same. In Cambodia the traffic is right-handed again.
The casinos that I pass are highly visible, the entrance to the Immigration Office behind them is hardly to recognize instead, but an official shows me where the counters are in the barrack. If you pay attention to it, then suddenly you see the signs.
Fill out the entry slip and line it up, but it doesn’t take long. Passport main page and visa are scanned, fingerprints are not taken. The official then skilfully compiled three stamps into one on paper, as well as on the entry slip, half of which was stuck in the passport again, and I was allowed to stay in the country for 30 days. Would they be enough to deal with the culture shock?

In any case, the town of Poipet connects seamlessly to the border, and here the travel guide is right: it is a dusty, booming nest.