After two days on which I mainly explored Macau on foot and otherwise put my legs up, I get back on my bike. Hong Kong isn’t really that far away, less than 50 kilometers, but can only be reached by land with a huge detour via the metropolis Shenzhen.
About half a year ago, a road connection between Zhuhai / Macau and Hong Kong was opened, a piece of highway with a total length of 55 km, a billion-dollar project that leads over three connected bridges and through a tunnel, but is of course taboo for bicycles. The bridge is mainly used by buses, but I have not researched whether I could have had my bike transported here.
Instead, I looked at the possible ferry connections between Macau and Hong Kong. That raised enough questions for me that could not even be clarified in advance. In any case, there are no vehicle ferries like the one between Hainan and Guangdong, just passenger ferries in the form of speed boats.

The ferry port in question for me, from where the boats of the Cotai Waterjet line to Hong Kong Island run, is unfortunately not in the north of Macau on the coast of the peninsula (Outer Harbor), but on the island of Taipa (Taipa Ferry Terminal) ), which makes it difficult for me to even reach the ferry.
The north and south halves of Macau are connected by three bridges, none of which is officially approved for bicycles. There are explicit prohibition signs on each of the outer bridges, over which expressway-like highways are led, and the middle and narrowest bridge is actually reserved for buses and taxis.

On the one hand, I am very happy to be able to get out of the narrow city, although Macau, despite its small size, has many exciting corners that I’ve not been able to discover in the past two and a half days.
The hustle and bustle in the winding little streets of the older districts makes the city interesting and the mixture of old Portuguese architecture, largely maintained as a World Heritage Site (but also in high demand for tourism), and the simple, rather haphazard-looking everyday architecture is unique. In addition, the large blocks of the casino hotels and the unreal-looking, golden mirrored tower of the Grand Lisboa in the form of a lotus flower set very contrasting accents. The 334 meter high Macao Tower at the southern end of the peninsula is also a rather unsuitable eye-catcher.

It is less than 10 kilometers from the Guia Hotel to the Taipa ferry port. I tried yesterday evening to find out if I could get my bike on a Cotai Waterjet boat and how I would have to prepare it, but at the only ticket counter in pedestrian distance of this ferry company, at the “Sands” casino hotel, I couldn’t be given any information.

So I start with the ‘Courage to fill the gap’ in the late morning fairly sunny weather and first roll down the Estrada do São Francesco, towards the southwest, towards the casino ‘Grand Lisboa’ and quickly have difficulty finding the right lane, on which I then continue towards the port and then on to Taipa, and don’t end in the driveway to one of the parking garages on Grand Lisboa. I roll a little too euphorically on the outer lane for too long without seeing in time that it doesn’t lead to the next roundabout, which is here at the lower end of the peninsula and serves as a central distributor.

The bad thing is: after I have worked my way up to the quay walls and rolled past the base of the not so high-looking Macao Tower, I can already see that two-wheelers are not allowed to drive up the ramp to the bridge. A sign directs them underneath and to the ramp that also leads to the bridge from the northwest, right through a construction site.
Yes, motorcycles have their own lane on this bridge, but bicycles are obviously not welcome here; Another prohibition sign directly at the driveway is as clear as it is incorruptible.
I can still drive past it, to the annoyance of the vehicles that have slowed down behind me, and will soon find myself again at the foot of the striking transmission and observation tower.

I have no choice but to cycle back around the inland lake Lago Nam Van to the central roundabout at Praca de Ferreira do Amaral and try my luck there. However, the bridge there towards Taipa is narrow. At first there are no buses behind me as I drive up the long ramp. Taxis can easily overtake me, but the city buses are a little wider and at some point a traffic jam forms behind me because a bus driver doesn’t dare. He soon starts honking and when I pass the top of the 35-meter triangle that forms the bridge, he finally passes. The southern ramp of the bridge leads almost back down to sea level and then for about a kilometer to the coast of Taipa. Whether this is actually an official way for me to get there – I don’t know.

Bicycles are obviously not favorites there, because it doesn’t get better after the bridge. I make a brief orientation stop at the entrance to a construction site, some high-rise buildings block my view, just like in other parts of the city. In a loop I have to drive around a hill with the traffic, but I can’t get straight to the port, the turning loop just before it is already part of the motorway access to the airport, which is also not far away. But pushing the bike, I finally get over the broad expressway and the barrier between the directions, and then across a side street and between industrial plants to the ferry port entrance.

My concerns about taking my bike with me onto a ferry quickly dissipate when I can buy a bike ticket directly from the ticket counter. I didn’t expect that at all, I don’t even have to dismantle the bike for transport and the bike is then stowed behind an unused counter on board the speed ferry. However, the ticket costs 65 Hong Kong dollars (about 7 euros).

The trip to Hong Kong Island takes over an hour, in the first class there are even cold drinks. The crossing is very comfortable and because of the bike I am even asked to get out early in the row. The passport control is also unproblematic in Hong Kong and, like in Macau, there is no stamp in the passport, just a printout that allows me to stay until the beginning of June. Outside of the “Macau Ferry Terminal” first I have to orientate myself. Left-hand traffic is also popular here in Hong Kong and there are actually only one-way streets, and then the traffic is more or less three-dimensional, because the lanes are also arranged one above the other. And these ramp constructions, which often lead to one of the expressways, are of course taboo for pedestrians and cyclists. 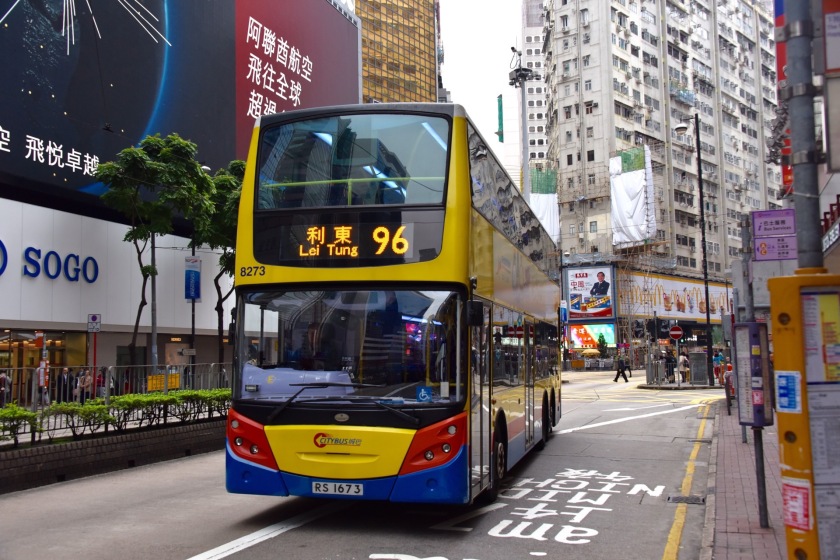 I want to come to Queens Road and drive along it for a while and luckily it is also one of the few roads that are signposted. So all I need to do is follow this sign at the beginning. There are many bus stops and besides taxis, the two-story buses are the most striking vehicles on the street. They are always very fast and at the stops they mostly ruthlessly get in my way. Apparently there are many different lines and the stops, at least here in the city center, are very close, often only a few hundred meters apart.

I have to stop at a lot of traffic lights, usually drive up to the line and then I’m usually the first. At least until an overtaking bus, that already drives to the next stop slows me down by pushing me to the lane border, is slowing me down. The road is 2 – 3 lanes; there is no lane reserved for two-wheelers here in Hong Kong. But the curb is high and a fence often delimits the footpath next to the road.

I have long since arrived on Hennessy Road and at the Causeway Metro station, from which my hostel is only about 200 meters away, but it takes me a long time to find it. It’s a relatively small building between all these tall office and shopping towers, and lots of signs for several small hostels hang out at the two entrances. The room I get on the first floor is extremely small, reminds me a little of Amsterdam and the sometimes very small hotel rooms there. For the next few days I can put my bike on a kind of balcony or extended canopy, right in front of the small window of my room.