The entire coastal area between Chonburi and Bangsaen is characterized by hotels and so-called resorts, smaller hut or bungalow villages of varied price categories. This continues roughly to Pattaya, whose skyline can already be seen from Bangsaen. This is a holiday region of the Thais themselves, but is also popular with many other Asians and Europeans.
Between the cities, with their riverside promenades, there are always long sandy beaches on which a narrow strip of shade-giving coconut palms is laid out, rows of shops with food stalls and fish boats. There are always simple takeaways and loungers lined up in the direction of the water, which you can rent together with a parasol. This is not particularly inviting, but the way to the big hotels, often right across the street, is not that far.

I only make the mistake once of wanting to ride a bicycle in such a tourist stronghold directly on the beach promenade or on the coastal road. Too many coaches invite travelers to or depart from or wait for day trippers. Group taxis, delivery vans, or people who just want to drive their cars to the sea and are looking for a parking space repeatedly block the left lane, which than is difficult to drive for two-wheelers. You can get faster e.g. in Pattaya with some distance to the sea.

From Bangsaen we drive south along the coast for a few kilometers on a sunny morning, past a small fishing port and after passing the Burapha University campus, which even has its own post office, up to trunk road 3. The sun means well, just like on the first days and the 30-degree mark was quickly exceeded in the early morning. Right at the second traffic light, where we have to stop, two other European-looking cyclists come from the coast onto the trunk road and turn in our direction. A retired Dutch couple, he is about 70 years old, as he says, who spends the winter in Thailand and neighboring countries. We talk briefly about the mutual travel plans, but then drive at our own pace for a few kilometers on the six-lane highway and soon shorten through the fishing village of Bang Phra, which is located directly on the coast. 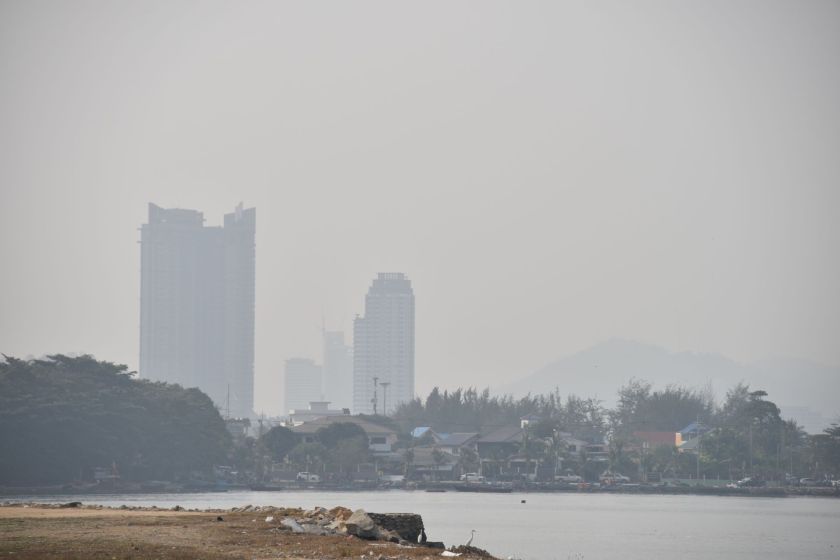 Later we meet the two again, because they are faster on the highway than we are in the winding alleys of Bang Phra, where we follow a river, on the banks of which are a few boats.
In Sri Racha, we temporarily leave the coastal region completely and drive the next 35 km through commercial areas that alternate with agriculture (cassava, sugar cane) and mostly strung together settlements. Driving is fun here and road traffic is much more manageable. Only at two crossing points with a freeway is truck traffic again more violent.

Only in the late afternoon do we come back to the coast and into the middle of Pattaya. It’s not just rush hour along the quayside and the traffic is largely at a standstill. Because of the large number of pedestrians and the construction site that runs along them, we are not really able to make any progress on the promenade. So back to the second and third row and in the near of a hill above the ferry port, about 2 km from the coast, we find very quiet rooms for the night.

The next day, the traffic volume changes. From Pattaya, we first drive south with a certain distance parallel to the hectic quayside, a fairly new arterial road almost only for us cyclists, at least until it directs us again to Highway 3. It is always loud here and the traffic keeps flowing, but because of the wide hard shoulder you can ride here almost undisturbed and, depending on the wind and terrain profile, you can move forward relatively quickly. So we wind the first 15 kilometers along this expressway and then turn into a hilly region, in which, in addition to a large golf area, there is also an important destination for the Buddhists of Thailand, the Big Buddha Hill. Here the contour of a seated Buddha is painted in gold on the steep wall of a huge, once broken granite rock.

The route leads along reservoirs and past two quarries, sometimes winds up uncomfortably, and now brings us far away from the tourist strongholds on the eastern Gulf Coast. On the 332, which leads further east, we come almost directly to a construction site where we have to accept a detour of about 2 km, which then also gives us an almost exclusive asphalt strip for a few more kilometers.
We take a slightly longer lunch break just before a crossroads in the shadow of a street restaurant set back from this street. There is a delicious soup with crispy noodles and the hot broth is really good, even though I am already heated up by the constant sunshine while cycling.

We meet highway 3 again in the afternoon and this time follow it for a few kilometers to the east before we drive the last 5 – 6 kilometers back to the Gulf Coast. In Phala Beach the selection of guest houses is not particularly large and since Maik still wants to jump into the sea, we stay in two bungalows directly on the beach. Here you can count the people on the beach with just one hand. However, in the hazy distance towards Rayong you can also guess the silhouette of a huge tank farm and the pier for tankers that juts out into the sea, which then somewhat dampens this idyll.