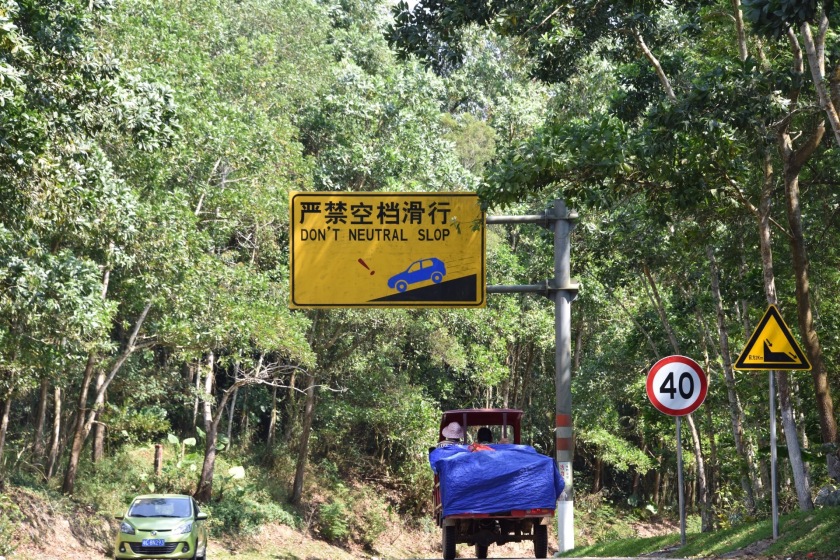 The days are sunny and warm, the daylight lasts till 7 in the evening, and in the morning the sun rises already at 7 (am) over the horizon. We develop a dayrythm, that lets us meet for breakfast at about 8 o’clock, and round about half past 9 we are already on the road. Often we get noodlesoup in the morning, sometimes porridge or steamed dumplings.

Xincun, Shenzhou, Bo’ao and Longlou are the stops on the way around the island, back to Haikou. Beach sections, cliffs, small mountains, agriculture and fish farming, markets and villages are just as much a part of it, as are some hectic inner city centers and views of construction investments, of which I can’t see nor explain the actual benefits, in this large number of emerging buildings.
There is advertising everywhere for the (probably to buy) apartments made, but who buys them? Right now, due to the Chinese New Year – high season in Hainan – the streets are clogged in the larger cities with large, new sedans and luxury SUVs of all major European (especially German) and Japanese car companies, but the already available big hotels and resorts are even not properly utilized. At least that’s my impression.
Although this part is only a marginal phenomenon for my trip, but can’t hide and is of course firmly linked to the development of Hainan. This aspect then provides a great contrast.

In Xincun there is breakfast in a street kitchen that also has few small tables on the walkway directly in front of it. One of them currently is available. I take noodle soup with some leek vegetables, and with an egg cooked directly in the soup, Florence prefers the meat insert. Since people cook with little salt here in China, and as salt shakers are never available in restaurants (one seasons usually with soy sauce), I had bought a salt shaker the evening before in a supermarket with a large household department (actually a small tin for toothpicks, as there were no salt shakers at all, together with a bag of sea salt, the remaining contents of which I had given the restaurant in which we later ate). So I salt the soup and try to compensate in this way for my now increased salt requirements.
The next morning in Shenzhou, e.g., we have breakfast somewhere when being already on the way, as there’s nothing available at the biker station, where we could sleep in tents. A day later in Bo’ao it’s a small mulslim restaurant, where we get noodle soup and where people can watch noodle making, take off the dough, outside the door. So every morning is different.

The laundry that we hung on the hotel roof in the evening did not dry overnight. It gets too cold at night and the humidity is just too high near the coast. Florence tries to dry her clothes with the hair dryer, then we soon leave the small town, that is quickly filling up with day tourists and we head north along the G223, away from the coast, because there is only a motorway that runs and with bicycles may not be driven. Presumably also because of the existance of this motorway, the traffic on the smaller highway remains pretty quiet throughout the day.

In Lingshui we cross the Lingshui River and after about 25 km the road leads into the mountains. In the wider area there are elevations of up to 400 m, the road itself winds over a few kilometers twice with up to 8% slope up to about 200 m, in the midday heat of about 30° C, and it is a demanding matter. We are not the only cyclists to do this route. On the first climb three people sit with mountain bikes and light day luggage in the shade of the slope, repairing one of their wheels. Just before the height I roll slowly past a family with two boys. The father is already waiting upstairs. I stand by and wait for Florence, who pushes her bike the last few meters up.
Then a long descent follows over several kilometers, which makes it easy to forget the short effort of the two climbs before. We are now rolling through the district of Wanning and through a still rolling landscape with wooded slopes.
In the village of Nanqiao then we have a lunch break, and a few hundred meters further fireworks are ignited.

Although the Chinese New Year is back already a few days, fireworks are always burned down, sometimes the firecrackers are heard like a dull rumble in the distance, in the towns and villages, through which we come. The scraps of paper of the chains of firecrackers lie scattered around in front of some houses picturesquely. And at many refuse collection points the remains of the fireworks from New Year’s night still pile up. The boulder chains can be several meters long, are rolled up in huge packages, and people seem to enjoy laying out such chains along the road and obscuring viewers’ passages.

Later we come back to the coast, which (partly a cliff) offers beautiful views and changes further into a coastal plain with agriculture and especially simple fish farming in large, shallow pools, which are powered by motorized paddles constantly with oxygen. Of course, also here in the background we see apartment skyscrapers near the beach.
The island of Shenzhou is connected to the mainland by two short bridges and here about 18 floor residential buildings are concentrated on the shore, while the sea side is decorated with a beach park and with the beach.
In the middle of the complex is a kind of center with restaurants and a supermarket, where we fill up our water- and fruit-supply in the evening, and where we have breakfast the next morning in a glorious sunshine.

For the night, however, we take, like some of the cyclists we met along the way, lodging at a bicycle station on the mainland, a bit hidden on the ring road, where in addition to shared rooms some tents are available. For the evening, the chef cooks personally for everyone and conjures up about 14 different prepared treats, mainly vegetables, on the round table.
As is customary in China, everyone attacks with his chopsticks everywhere and tastes of (almost) every dish – a happy jumble and the best way to get to know a wide range of Chinese cuisine.